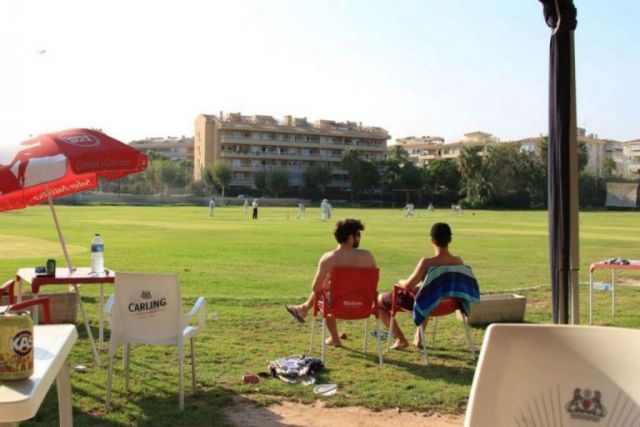 Having rejected Blaiklock’s suggestion of a team tandem cycle across Europe, the Badgers followed Pete Jinks’ upraised clipboard through to the Gatwick departure lounge and prepared themselves for adventure in sunny Spain and debauchery in shameless Benidorm. Four games were played in all, resulting in 2 wins and 2 losses. Here’s how the tour party fared…

Leading from the front, Captain Dollimore powered an unbeaten century in the win against Sporting Alfas Midweek XI and claimed a vital monster catch against their 1st XI in the Saturday game. Everyone is welcome to see his batting wagon wheel, day or night, but one person who won’t be taking him up on the offer is the lady he berated for being too fat to ride a mechanical bull in a Benidorm bar.

Assuming the captaincy of ‘Team Asia’, Blake blended in immediately to his spiritual home of Benidorm. Amusingly asked to re-clothe himself whilst umpiring, he later took his frustration out on the hapless batsmen, taking 3/10 against Sporting Alfas. Adding further to his reputation of impiety and sin, against Levante he tried to claim a bump ball when caught out, only for video evidence to condemn him as a naughty little liar.

Reports of naked sleeping and stories of shitting in his own garden were the main events that punctuated this gentleman’s tour of Spain. A late call-up to Team Asia, he brought joy and pain in equal measure - helping to formulate their ‘Look East’ catchphrase while refusing point-blank to flush the bathroom toilet. 6 wickets in 3 matches proved a decent return for the Badger King of Spain.

Arriving back from self-imposed exile, he became the first Badger to pass the 2000-lifetime-runs milestone during his 33 not out against Sporting Alfas. He also slid down the slides very quickly at the waterslide park.

Lucky to escape Spain without arrest, Warman attempted to kill a fellow Badger on two separate occasions during the match against Levante. Calling Foord in to short mid-wicket, Warman proceded to bowl a long hop for the batsman to smash past the fielder, centimetres away from his head. Undeterred by this failed attempt, 3 balls later Warman took out the middle-man and bowled the ball straight at Foord. Rumours that Foord had described Warman’s Welsh Cakes as ‘no better than edible’ are as yet unconfirmed.

One of only two Badgers to visit Benidorm twice, Lee made up the third pillar of the Team Asia triumvirate. Suffering a hamstring injury after following Dollimore’s advice about running his bat in, he refused to let internal bleeding rule him out of the Levante match. It’s difficult to say whether he was happier about scoring 39 not out against XL Club of Spain or drinking 8 jugs of sangria while watching the Alfas game.

Another of the Heroes of Levante, he played on through the pain of a broken toe. Touring for the first time after ‘accidentally’ mixing up his holiday dates in previous years, he proved a willing foil to Dollimore’s heroics against Alfas, scoring a rapid 41 himself. Absolute liability in the boat race.

A sweaty sweaty beast, as Jinks found out to his cost when he lent him his helmet. Having happily left it in the sun to dry, Jinks looked on in horror as the barbeque king strapped it to his waterfall face and strode in to bat. He took 4 crucial wickets against Sporting Alfas 1st XI and also weighed in with scores of 44 and 35.

The only player not to bowl on tour, he instead made it his mission to prove to Foord that he could score more than 14 runs in an innings (his previous highest score in all games that the two have lined up together). Scores of 22 and 78 ended the curse but he was still very very sad that he missed the trip to the waterslide park.

On the one hand to be found ordering a Caesar Salad in the cultural surroundings of Valencia. On the other hand, kicking over his stumps and describing Benidorm as a town ‘dripping with minge’. Also, there’s now a slightly larger hole in the ozone layer above the Costa Blanca thanks to this man.

Modelling himself on Darren Anderton, Maskell played fast and loose until injury ended his tour early. Recovery proved impossible given the strain on his body from waking up to the trumps of Mcluskey and Foord every morning.

A classy 14 not out heralded her return to Badgerdom. She managed to keep her tongue in check when umpiring decisions displeased her but showed the crowd a little of her fiery spirit by head butting the stumps in what she claimed was a dive to regain her ground.

He announced his return from injury with 62 not out against Levante and 3 wickets against Alfas. He announced his arrival onto the Benidorm bar scene by doing a lot of punching.

Answering the call for someone to fill the chippy Austrailian quota, Cornish smashed 75 against XL Club of Spain and 43 against Alfas. His strike rates were 150 and 226 and he took a stonker of a catch against Levante. These high standards were also in evidence when he criticised the Benidorm transvestites for not being high quality enough for his liking.

Perhaps the most fined man on tour, owing to the selfish refusal of his pregnant wife and unborn child to take their own alcoholic punishments. He courted controversy by doing an excessive amount of pole dancing and suggesting that badger could be a viable source of food. He redeemed himself by providing top-notch organisation of a wonderfully enjoyable tour. Legend.